Getting out of bed for my run on Saturday, I decided to take a run at Chula Vista Marina View Park. I’ve never run at this park and have only visited it one time since I have lived here in San Diego. I love my weekend runs because I can venture out of my area and can chose where I run. I’m not restricted by work and time although I had to keep this run short because I needed to be back home to watch my granddaughter J. I’d planned to run 7 or 8 miles/11 or 12 Km depending on the park route. The run turned out to be 7.52 miles/12.1 Km in 1:16:57 minutes with an avg pace of 10:14/mile. I’m not sure what was wrong Saturday, but I had to fight to get those times; it seemed like as soon as I got to the 3mile/4.8 km mark my body didn’t want to cooperate, I had to push though pain/cramping in my legs and ankles until I got to about the six mile mark and everything seemed to go back to normal. Not sure why that happened. 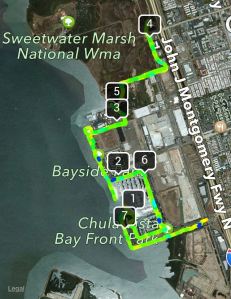 As it would turn out; it was not one park where I ran. I started in Chula Vista Marina View Park and spilled over in to Chula Vista Bayside Park (south and north) which is more or less separated by a marina. I didn’t know that it was two separate parks until I started running and notice a sign indicating I was entering Chula Vista Bayside Park. Running along the shoreline of the parks, it ended up being on 2.76 miles/4.4 km so I had to continue my run outside the park to the 4mile/6.4km point in order to achieve my minimum 7mile/11km goal. If you haven’t noticed, I don’t like running in circles and only backtrack if I have too. 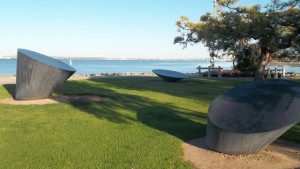 Having arrived at the entrance of the park at around 7:30 am, I was greeted with a cluster of ducks foraging in the grass still moist from the morning dew. It was a beautiful morning, warm almost too warm by the time I would finish my run. I was a lone runner, other people in this park were ither walking, walking their dog or fishing off the pier. I started out at the entrance of the park and ran along the shore line. Just before the one mile mark. I ran past these sculptures of three metal inverted truncated cones titles ‘Konoids‘. 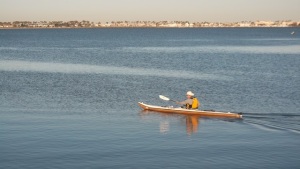 Just past these disk is a jetty that shoots out at the mouth of the marina I think to make a break water; I ran out to the end and snapped a picture of a gentleman rowing his Kayak out into the bay. Running on I travestied the marina and discovered a schooner called the ‘Bill of Rights’ moored in its berth. I’d never seen this ship before nor did I know a schooner of this type was moored there; it’s a beautiful ship; wish I could afford to ride her.

The Bill of Rights constructed in 1971 in South Bristol Maine by Harvey F. Gamage. The Bill of Rights was fashioned from the drawings of the schooner Wanderer, an 1856 vessel build to carry cargo from New Orleans to New York.

Heading north I came to the corner of the marina and turned left. This is when I noticed that I had switched from Chula Vista Marina View Park to Bayside Park (north); with the marina now on my left hand side I run into the park at the end of the marina. A little more than the 2 mile/3.2 Km, I found this sculpture of a Great Egret with a fish in its mouth titled ‘The Fisherman‘ and just a few feet from it was the entrance to the fishing pier. Running down the pier, I looked in the buckets to see if any had caught fish but saw none. Besides the 7 fisherman, the only thing to be had on the pier was masses of small flies that provided a wonderful massage on my face as I ran through them.

Continuing on along the shoreline again, I passed an area with pull-up bar, gymnastic rings and inclined/balance beam. I stored this location in my mind as I might find it useful in the future. Not far after I came across a man hosting a Piñata preparing for a party that would be held later that morning. Near the far end of the park at about the 2.5 mile mark, I found this art called ‘ Wind Oars ’ I guess they are interesting to watch when there is a good breeze coming off the water, not so much Saturday and there was little if any breeze so I was unable to see them in action.

I attained the 3 miles mark well outside the park while I ran past a small Marine Group shipyard that had a beautiful ship in their yard called the ‘Tamsen’ a 183′ Perini Navi Italian sailing yacht. Something I imagined Bill Gates or one of his executives would own. How I would love to travel port to port on a ship like that. Once I reached the 4 mile/6.4 km I turned back retraced my steps with a few ‘route modifications’ back to the spot where I started my run. 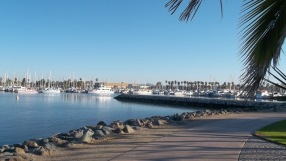