I haven’t done any long runs this week, mostly short for whatever reason my calves haven’t been up to them. No amount of foam rolling or stretching seems to help. But for me some running is better than no running at all and what I wont do is let myself do less the a 5K no matter how much my mind is yelling at me to stop. 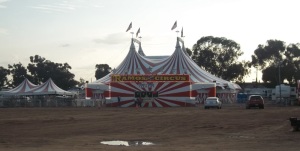 tents was along my normal running route. I smelled them before I saw them; you see at the 1.5 mile mark into my run I’m downwind from the circus so end up running into what seems like a thick vapor of elephant, other animal, and very possibly clown poo for the next ½ mile.

It is quite a training enhancer though, as I find that I tend to run faster in direct relation to the thickness of the vapor entering my lungs as I run in the direction of the circus. This is not because I am absorbing energy rich nutrients, no; it’s because of the need to get past the circus before I lose consciousness from lack of oxygen or over exposer to poo spores.

There was one day that I didn’t suffer from poo inhalation, which was yesterday. Yesterday’s 5K run felt like a 13K. It rained mid-morning and by the time I got to my run at 6PM the humidity was super-high and to make things worse there was no breeze at all.

Where this lack of air movement made my approach to the circus poo free, I felt like I was back in the Philippines running. By mile 2 every part of me wanted to stop running, at mile 3 my brain was trying to convince my body it was okay to walk because I already did three miles and it was just not logical to run uphill that last half mile. But, my body won out and my brain relented; only to complain again once I got to the end of my run. What were you doing, trying to kill me?… stubborn body… YOU NEVER LISTEN TO ME.